Deep in remote Florida swamps, a team of researchers and photographers have made a new discovery that upends what we thought we knew about the ghost orchid, one of the world’s most iconic flowers, and how it reproduces.

These rare, charming orchids were long thought to be pollinated by a single insect: the giant sphinx moth. This massive creature sounds like a miniature jet as it zooms through the swamp with a six-inch wingspan, says conservation scientist Peter Houlihan. 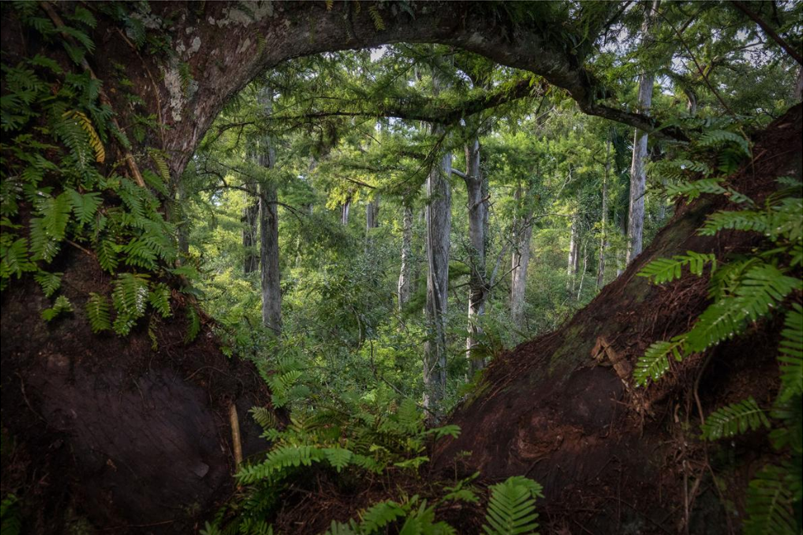 But now, photographs by Carlton Ward Jr. and Mac Stone show that a couple of moth species other than the giant sphinx visit and carry the ghost orchid’s pollen—and the giant sphinx itself may play a completely different role than previously thought.

These results provide insight into the plant’s virtually unknown reproductive biology, and they suggest that conserving the endangered species may be less difficult than assumed, since it’s not dependent on only one pollinator, says Houlihan, who collaborated with Ward and Stone to make the discovery. The findings also show the ghost orchids can be important food sources for moths.

Ghost orchids are found in Florida and Cuba, and there are only about 2,000 ghost orchids in the state. As few as 10 percent of them flower each year during an unpredictable window in the summer. The plant has no leaves, consisting of green roots that cling to the bark of several tree species. When they aren’t blooming, they look like unremarkable bits of green linguine, and are difficult to find.

They also generally live in swamps that are not easy to access—and home to animals such as bears, panthers, alligators, and several venomous snake species, which dissuades many from attempting to see one.

On a recent summer day in Florida Panther National Wildlife Refuge, home to a quarter of the state’s ghosts, I spent many hours searching for one in bloom with Ward and refuge biologist Mark Danaher. We hiked through knee-deep water the color of sweet tea from early morning until afternoon, marveling at the abundance of diversity of air plants and orchids. When we finally found a ghost, it was really magic. 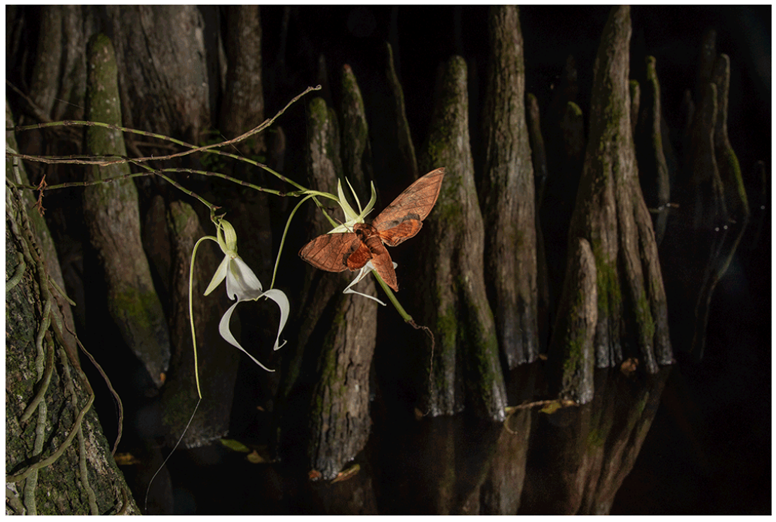 The plant’s bright white, delicate flowers seem to hover above its stems, and the modified petals have long, curly legs that flutter in the breeze. In the center of the flower is the entrance to a tube called a nectar spur, which contains sweet secretions. Ideally, the nectar will attract a moth, which will elongate its tongue-like proboscis and stick its head into the tube. If all goes well, the moth will contact the plant’s bundle of pollen, called a pollinium, which will stick to its head, and hopefully be carried on to fertilize another ghost.

These orchids have long nectar spurs, stretching five inches or more in length, though this varies. Given the size of the tube, it has long been thought that only the giant sphinx moths would be capable of reaching the nectar.

But when Ward set up several remote camera traps in this wildlife refuge, he documented five species of moths visiting these ghost orchids. Two of these species, fig sphinx (Pachylia ficus) and rustic sphinx (Manduca rustica), had ghost orchid pollinia on their heads.

Stone and Houlihan worked out of Corkscrew Swamp Sanctuary, one of the world’s largest old-growth cypress forests, a 45-minute drive to the northwest.

The sanctuary, owned and operated by the National Audubon Society, has set up a scope for visitors to see a massive ghost orchid, known as the “super ghost.” This flower sits 50 feet up on a cypress, and it’s the only ghost that is relatively easy to see. The orchid currently has eight flowers, “which is just insane,” Stone says—most plants put out only one flower at a time.

In 2018, Stone (assisted by Houlihan) spent countless hours setting up a camera on this orchid, tree-climbing and tinkering. 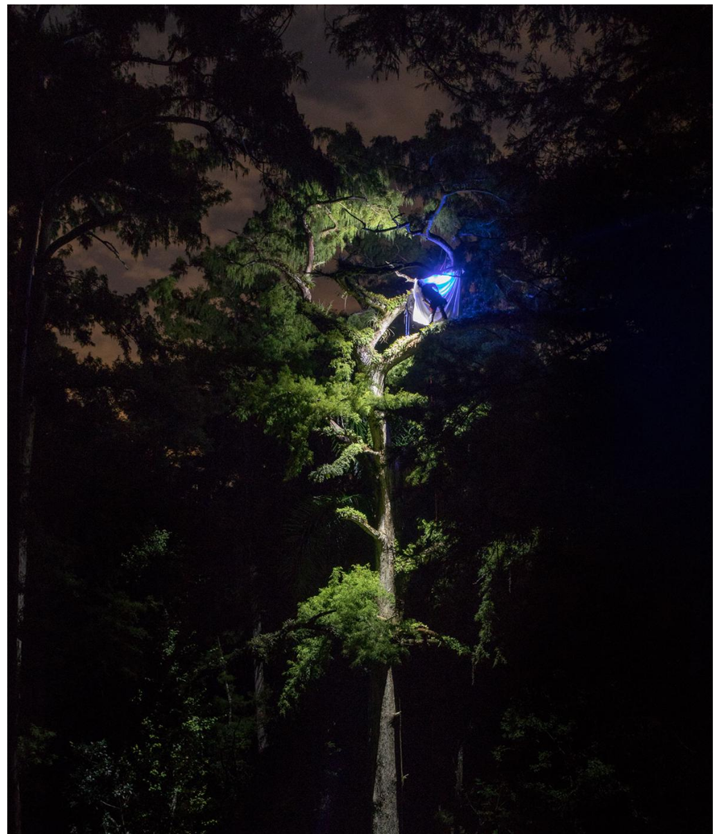 Stone, who lives in South Carolina, says that during the height of the work last summer, he’d often lay awake at night thinking about how to perfect the shots. “I’d book a last-minute flight and then just move my camera an inch,” he says. “It was just madness.”

All experienced a bit of orchid fever. “I do think it’s possible that orchids drive people crazy,” Ward says: The two photographers had their cameras trained on the flowers for a total of 7,000 hours.

But all this work paid off. In August Mac captured photos of a fig sphinx visiting the flower with ghost orchid pollinia on its head, complementing Ward’s pictures of the same in the panther refuge. Results from the collaborators have been submitted but have not yet been published in a peer-reviewed journal.

Both photographers also revealed giant sphinxes visiting the ghosts—but the insects weren't carrying any pollinia. In one shot by Stone, the moth can clearly by seen drinking nectar, but its head is not nearly close enough to the flower to pick up the pollinium.

This led to a wild hypothesis: Perhaps the giant sphinxes steal nectar from the ghost orchids without pollinating them, Houlihan says. His research also turned up a dozen local hawkmoth species (including Pachylia ficus and Manduca rustica) that have tongues that are long enough to theoretically sup the orchid’s sugar.

“There are probably lots of moths that can pollinate these flowers,” he says.

There are many flower species that are pollinated by a single moth or butterfly.

Most famously, in 1862, Darwin examined a Madagascar orchid now named after him (Darwin’s orchid, or Angraecum sesquipedale) that has a foot-long nectar tube. He was somewhat exasperated, as he hadn’t heard of any moth with a 12-inch tongue. “Good heavens,” he wrote, “what insect can suck it?” He hypothesized that there must be an insect in the area with just such a proboscis.

He was proven right 130 years later, when Morgan’s sphinx moth (Xanthopan morganii) was seen feeding from the orchid with its huge tongue. Houlihan’s studies of this moth, funded by the National Geographic Society, helped lead to his work on ghost orchids.

This example may have rubbed off on people’s thinking about the ghost orchid, says Larry Zettler, an orchid expert at Illinois College. “Everyone assumed the same kind of thing would happen with the ghost orchid, because you don’t have this massive nectar spur for no reason,” he says.

But having multiple pollinators, which apparently isn’t the case for Darwin’s orchid, will help to provide more opportunities for the ghost orchid to successfully reproduce.

“It’s good to have redundancy in ecosystems,” says Mike Owen, a biologist at Fakahatchee Strand State Preserve, where he and his colleagues have discovered 450 ghost orchids since 1993.

Two months after Owen started his job, horticulturist John Laroche, along with two members of the Seminole tribe, were stopped while attempting to remove dozens of valuable air plants and orchids from the preserve. This haul including three ghost orchids—a story told, along with the giant-sphinx-only pollination theory, in Susan Orleans’ book The Orchid Thief and the film based on it, Adaptation.

Since that time, the reserve has introduced various measures to reduce poaching, such as installing camera traps. The same is true in the panther refuge, Danaher says, where more than 40 cameras have been installed to catch photos of wildlife and would-be poachers.

Poaching is not only illegal, but a terrible idea, because ghost orchids invariably die after being moved even slightly, Owen says. They require very specific micro-environments, which is why they thrive in Florida’s swamps, where flowing water slowly passes through, moderating temperatures and humidity. Fakahatchee Strand, a channel of low-lying, oft-flooded strand forest has the highest diversity of air plants and orchids in the continental U.S.

Development in South Florida has severely altered water flows that are so vital to the ecosystem and the orchids, but the importance of this untrammeled flow is being increasingly recognized.

The importance of old-growth

It’s also crucial to conserve remaining old-growth forests, which are home to ghosts and many other rare plants and animals, says Shawn Clem, research director for the sanctuary. 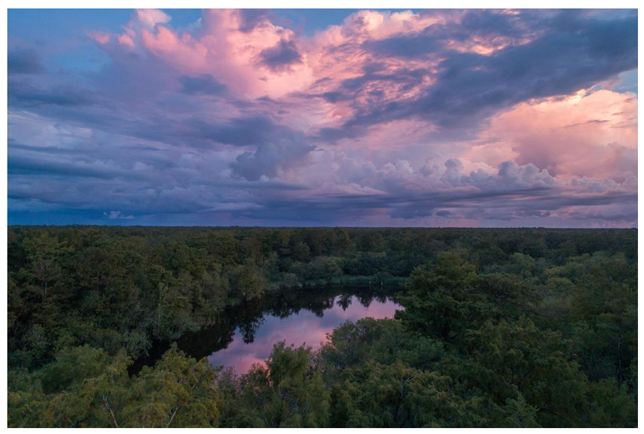 The super ghost itself shows people that the flower is not an abstract concept—but a very real plant that depends on a healthy flow of water to survive, she says. The new discovery about the ghosts’ pollinators “speaks to the need for conserving places like Corkscrew so that we can continue to understand the complex ecology of the region,” Clem adds.

Cypress trees once covered much or most of southwestern Florida, and Corkscrew offers a glimpse of how the land once appeared. Many trees reach to heights of around a hundred feet, and some of them are about 600 years old.

The super ghost is by far the highest situated of its species, and one of only few known to occur in cypress trees. But Houlihan and Stone think that, once, it was probably a common scenario—and these highly perched plants were likely incredibly important for seeding the understory below.

“This is just one reason why these old-growth forests are so important,” Stone says.

The plants produce hundreds of thousands of tiny seeds, which are distributed by air currents, and as you can imagine, it’s easier for seeds to drift downward from a high spot than to be lifted upward.

When the seeds land in a choice spot, they must also come into contact with the right kind of fungus. This is the case for all orchids, and many of them require an individual species. Zettler recently discovered that ghost orchids can only germinate in the presence of one species, in the genus Ceratobasidium.

That being said, Mike Kane, a horticulturist at the University of Florida, has figured out how to cultivate ghost orchids in the lab. That discovery has already helped to increase the supply of plants, some of which have been replanted to the wild, in places like the panther refuge.

There, and in the Fakahatchee and Big Cypress National Preserve, the ghost orchids are primarily found in pop ash trees, followed by pond apples. These trees are much shorter than cypresses, and many of the ghost orchids there are only a few feet off the ground.

When I finally saw my first such bloom, chest-high, with lip-like petals and a striking bright white color, I began to see how orchids hold such strange power over people. Ward is a good example.

After seeing his first flowering ghost in July 2012, in the Fakahatchee preserve, he returned for three days in a row to get the right shot—and has been photographing them ever since.

“The ghost orchid motivated me to explore these swamps,” Ward says, “and I hope its story can inspire others to protect the places where it lives.”