These Butterflies Evolved to Eat Poison. How Could That Have Happened?

The caterpillar of the monarch butterfly eats only milkweed, a poisonous plant that should kill it. The caterpillars thrive on the plant, even storing its toxins in their bodies as a defense against hungry birds.

For decades, scientists have marveled at this adaptation. On Thursday, a team of researchers announced they had pinpointed the key evolutionary steps that led to it.

Only three genetic mutations were necessary to turn the butterflies from vulnerable to resistant, the researchers reported in the journal Nature. They were able to introduce these mutations into fruit flies, and suddenly they were able to eat milkweed, too.

Biologists hailed it as a tour-de-force that harnessed gene-editing technology to unscramble a series of mutations evolving in some species and then test them in yet another.

“The gold standard is to directly test mutations in the organism,” said Joseph W. Thornton, an evolutionary biologist at the University of Chicago. The new study “finally elevates our standards.”

The right dose can stop a beating heart or disrupt the nervous system. For thousands of years, African hunters have put these poisons on the tips of arrows. Agatha Christie wrote a murder mystery featuring foxglove, which produces cardiac glycosides.

The toxins gum up so-called sodium pumps, an essential component of all animal cells. “It’s a very vulnerable point, and plants have targeted it,” said Susanne Dobler, a molecular biologist at the University of Hamburg in Germany.

These pumps move positively charged sodium atoms out of cells, giving their interiors a negative charge. Heart cells need sodium pumps to build enough electrical charge to deliver a heartbeat. Nerves use the pumps to produce signals to the brain. If the pumps fail, then those functions come to a halt.

Despite the dangers, monarch caterpillars are completely dependent on toxic milkweed. Females lay their eggs on the plants, and the caterpillars eat as much as they can before forming a chrysalis. 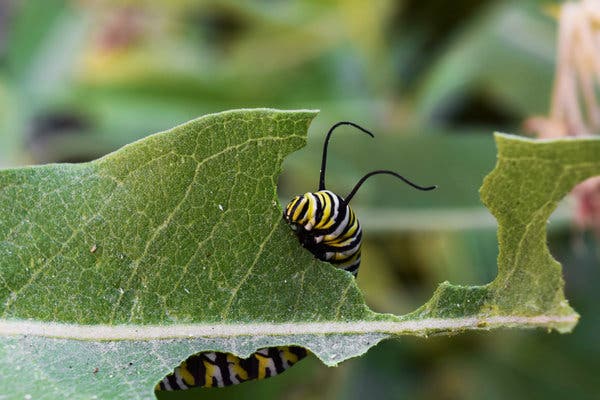 A monarch caterpillar eating milkweed. The caterpillar will become a butterfly, and the plant’s toxins will eventually end up in its wings.Credit Victoria Hawkins/Alamy

As they develop into adults, the pupae shuttle milkweed toxin from their guts to their new wings. After emerging from the chrysalis, the monarchs become flying poison. Birds that try to eat the insects vomit them back up.

To understand how monarchs evolved this adaptation, Dr. Dobler and her colleagues took advantage of the fact that other insect species also have evolved a resistance to cardiac glycosides. A few even eat milkweed.

The researchers compared the genes that serve as blueprints for the sodium pump in poison-resistant species, like the milkweed beetle and the milkweed bug. Most of these species, it turned out, had gained the same three mutations.

But the mutations did not pop up all at once. Instead, they arose one after another.

Monarchs share one of the mutations with a related butterfly that doesn’t eat milkweed, and a second mutation with a closer relative that eats milkweed but doesn’t store cardiac glycosides in its wings. The third mutation arose in an even more recent ancestor.

Gaining these mutations gradually altered the sodium pumps in the monarchs’ cells, Dr. Dobler suspected, so that the cardiac glycosides couldn’t disrupt them. As the butterflies became more resistant, they were able to enjoy a new supply of food untouched by most other insects.

Noah Whiteman, an evolutionary biologist at the University of California, Berkeley, led the effort to test this hypothesis. “These three mutations may be the thing that unlocked the door” for the butterflies, he said.

He and his colleagues figured out how to use Crispr, the gene-editing technology, to introduce the mutations into fruit flies. The flies survive on rotting fruit, and even a small dose of cardiac glycosides can be deadly to them.

The researchers began by giving the flies the first mutation to arise in the ancestors of monarchs. The larvae that carried this mutation were able to survive on a diet of yeast laced with low levels of cardiac glycosides.

The second mutation let the flies withstand even more toxins, and the third made them entirely resistant. With all three mutations, the flies even ate dried milkweed powder.

The third mutation had another striking effect. When the flies with the gene developed into adults, their bodies carried low levels of cardiac glycoside, useful as a defense against predation. 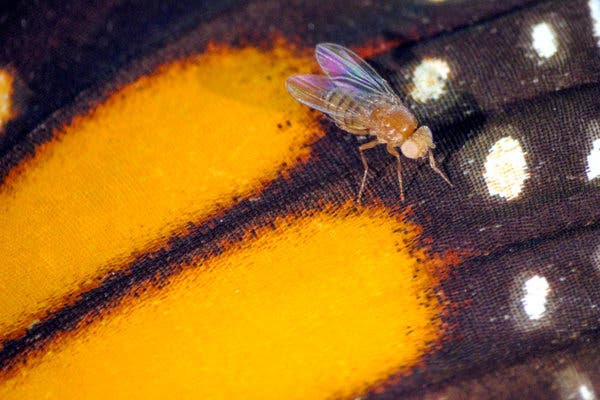 A genetically modified fruit fly engineered to resist the toxins in milkweed, resting on a monarch’s wing. The fly was given genetic mutations found in the monarchs.Credit Juliane Pelaez

Dr. Whiteman and his colleagues also found a remarkable pattern. One of the three mutations, called 122, provided the biggest boost in resistance. But in all of the insects resistant to cardiac glycosides, that mutation always evolved after the other two.

As it turned out, 122 on its own has a nasty side effect.

The researchers put the mutant flies in a centrifuge and spun them for ten seconds. Afterward, the flies were overwhelmed by seizures for several minutes.

Ordinary flies, by contrast, immediately walked away from the laboratory carnival ride. Flies with the other two resistance mutations were also unharmed by the procedure.

Dr. Whiteman and his colleagues suspect that the 122 mutation is beneficial to insects only if it is preceded by another mutation. On its own, 122 may bend the pump into a deformed shape that makes the insect prone to seizures. Perhaps other mutations compensate in some way.

Other studies have suggested that the order of mutations can make a big difference in how a creature evolves. Bacteria, for example, can gain antibiotic resistance from certain genetic mutations. But some of those mutations are only beneficial if they evolve after others.

The new study now shows how the order affects animals, too.

“They really are reconstructing evolutionary history,” Hopi Hoekstra, an evolutionary biologist at Harvard, said of the new research. “You can piece together what happened over time.”